A 26-year-old Canadian man has been arrested at Auckland International Airport today and charged in relation to the importation of $8 million worth of ‘P’.

The man, who had been living in Auckland, was stopped trying to leave the country today after Customs searched a package, declared as an ornate footstool, with 8 kgs of methamphetamine hidden inside.

The package, sent from the USA, weighed around 50 kgs. Once opened, officers at the Air Cargo Inspections Facility discovered what appeared to be a fibreglass and concrete block with a few decorative mirrors and beads attached to each surface.

The item was deconstructed and 18 plastic bags filled with a crystalline substance were found inside. Testing showed a positive indication for methamphetamine.

“This is an excellent result for everyone involved which included Customs officers with support from the logistics industry and concerned members of the public. Collectively they have stopped a large quantity of meth from harming New Zealanders and identified a person allegedly responsible.

The man has been charged with importing a class A drug and is yet to appear in court. 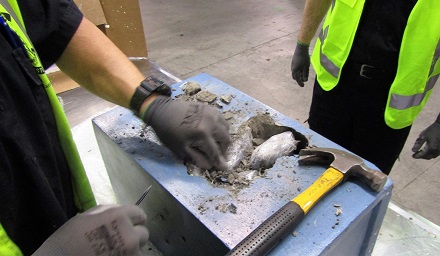 A 27-year-old Canadian man has been sentenced to 15 years’ imprisonment for smuggling 8 kg of methamphetamine inside a concrete footstool.