Latest update – 20 September 2022: Travellers to NZ no longer need proof of a COVID-19 vaccination to enter the country. Testing on arrival is still recommended. Everyone travelling to NZ by air needs to complete a New Zealand Traveller Declaration so electronic data is available to enable rapid contact tracing of new strains. Queen Elizabeth II Memorial Day: All Customs offices will be closed on Monday 26 September to commemorate the Queen Elizabeth II Memorial Day. The Memorial Day will not be a “working day” for calculating time periods and due dates. For more information visit the Important Notice webpage.

An Australian man living in New Zealand was sentenced to 6 years and 10 months’ imprisonment today in the Wellington District Court for importing 1.46 kg of meth.

On 19 January 2016, Yoram Kalev, arrived in New Zealand via Sydney after a trip to Hong Kong and was stopped and questioned by Customs at Wellington International Airport.

During a search of Kalev’s belongings a Customs officer noticed that a neck pillow he was carrying was unusually heavy. A second neck pillow was found in the luggage and x-ray images of both pillows showed inconsistencies.

Investigations Manager, Maurice O’Brien says the drugs could have fetched up to $1,466,000 on the street but today’s sentencing shows once again that crime doesn’t pay.

“This was an excellent example of our officers using passenger targeting systems and their skills and expertise to find and stop drugs. Keeping harmful drugs away from our communities is a priority.”

Kalev pleaded guilty to charges of importing class A drugs and possession of a class A drug for supply. 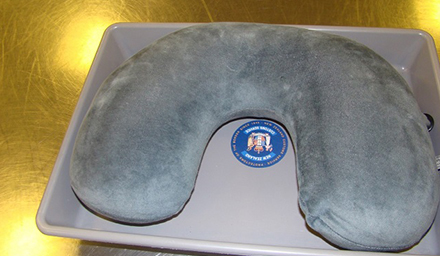 Customs arrested a man this morning who had approximately 1.5 kg of meth in neck pillows.