Customs has arrested and charged three foreign nationals after locating 5 kg of MDMA, worth $2.1 million, hidden in the lining of their luggage.

They appeared in the Christchurch District Court today.

The trio, two men aged 32 and 35, and a woman aged 31 arrived on a flight from Europe via Singapore, and were stopped and questioned by officers at Christchurch Airport.

X-rays of their luggage identified inconsistencies, and on close examination, Customs officers located a number of packages hidden inside the lining of one of the cases.

Using Customs’ drug analyser, the First Defender, the packages tested positive for MDMA. The combined weight of approximately 5 kg has a street value of up to $2.1 million.

Manager Central and Southern Ports, Joe Cannon says this is another example of Customs intelligence at work to identify and stop drug smuggling at our airports.

“It doesn’t matter which airport, using intelligence and experience, our vigilant frontline officers are alert to smuggling efforts and will stop those identified.”

“Criminals often try to “hide in plain sight” but our work is intelligence-led and we do extensive screening to identify those that may pose a threat.”

This is Customs’ fourth arrest within a week after a Brazilian woman was stopped at Auckland airport last Sunday with 4.6  kgs of cocaine in her luggage. 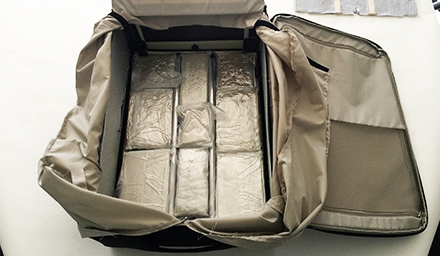 Two Russian nationals will each spend five years behind bars for trying to smuggle $2.1 M worth of MDMA or ecstasy in a suitcase last year.