A 29-year-old Auckland businessman has appeared in the Auckland District Court today after Customs arrested him in relation to tobacco smuggling.

A 29-year-old Auckland businessman has appeared in the Auckland District Court today after Customs arrested him in relation to tobacco smuggling. He faces multiple charges under the Customs & Excise Act and the Crimes Act, and more charges are likely.

In early January 2020, Customs examined a sea cargo consignment of new household items, likely for resale, and discovered it contained 75,000 undeclared Chinese-branded cigarettes. The total evasion of Customs duty and GST amounted to $83,365.

Initial enquiries found the name of the person receiving the consignment was a false identity. Subsequent investigations linked the shipment to the businessman, and showed the use of a number of storage facilities and PO Boxes across Auckland that had been opened using false identities. The storage facilities and PO Boxes were likely used to facilitate illegal imports, prior to the cigarettes being sold wholesale, using Chinese social media channels.

Customs Investigations Manager Bruce Berry says the number of illegal tobacco seizures has increased substantially in the past few years, and this latest case is an example of the ongoing trend that Customs has seen during the COVID-19 pandemic.

“Organised crime groups and individuals have been somewhat constrained in their ability to smuggle tobacco, due to COVID-19. Nevertheless, Customs has continued to seize considerable amounts of illegally imported tobacco in recent months, both in sea freight and international mail.”

From January to the end of April 2020, Customs has made 374 interceptions, adding up to 977,637 cigarettes or cigars and 65 kilograms of loose tobacco. This excludes an additional 592 kilograms of tobacco products abandoned by those who did not want to pay taxes.

“Like illegal drugs, the relatively high price of tobacco makes New Zealand an attractive market. We are seeing both organised crime groups and opportunists trying to smuggle tobacco into the country to evade duty and make money. This latest arrest, once again, shows that Customs will do everything it can to stop this illegal activity,” Mr Berry says.

Customs has also today welcomed the sentencing of another Auckland businessman who was arrested at the end of 2018, in what has been Customs’ largest cigarette operation to date. The man was convicted for smuggling 19,419,400 cigarettes, and evading over $18.7 million in Customs duty and GST. He was sentenced to 5 years and 3 months’ imprisonment.

“This sentence should send a clear message to organised crime groups and opportunists that Customs is as focused on tobacco smuggling as it is on other illicit commodities. The recent change in tobacco legislation will give us an even greater ability, from 1 July 2020, to take quick enforcement action against law breakers,” he says. 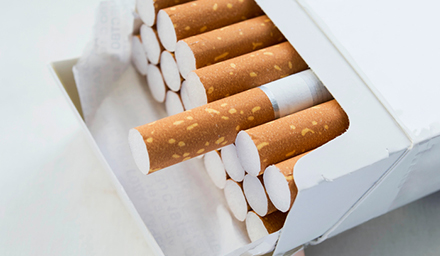 A Customs investigation has resulted in the seizure of around 1.8 million smuggled cigarettes and cash estimated to be over $2 M.